“Dear all, little unexpected with the Pandemic peaking left and right, yet still with a heavy heart, we do have to push back our Feb and March live dates across Europe and in Finland. We are now heading towards you in Sept and Oct of this year. Let’s make this first Moon Shot headline run happen and everyone have a good time then! We simply can’t wait to play for you guys, after all these Pandemic-driven times!”

Moon Shot is a true 21st century rock band. Its four guys have gigs galore under their belts from around the world as members of Disco Ensemble, Children of Bodom and Lapko. Now they’re on a roll again, together for the first time. Moon Shot is a big bang to a new planet of sound.
The guys launched on a path that spanned thousands of gigs in hundreds of countries in the ranks of Disco Ensemble, Children of Bodom and Lapko. Crusading through most continents, if not quite the seven seas, has given Jussi, Ville, Henkka and Mikko sureness of performance and musical vision for melodies that cure maladies. Because isn’t that what rock at its truest is all about: raging to love?

What do you do after your life’s work?

Call it quits? Take a break before a comeback?

No. You start again. You seek out others with the same dedication to musicianship. Others who have learned from experience how to make a rockband really tick. And you use what’s a little different now to take the shortcut to the runway and takeoff beyond Earthly pleasures.

Shoot from the hip to the moon.

If you still have the spark, that is. And these four men truly do.

The Moon Shot foursome has turned back with more maturity to rediscover what they’ve always loved.

“WE’VE GONE BACK TO WHAT REALLY TURNED US ONTO MUSIC WHEN WE WERE IN OUR TEENS AND TWENTIES. THAT’S THE MUSIC THAT NEVER LEAVES YOU,” says guitarist Jussi Ylikoski, who got Moon Shot started with his demos – the guy with Disco Ensemble in his past.
“AFTER A WHILE OF RUNNING AROUND AND LOOKING FOR THE NEXT GREAT THING, I JUST STARTED LOOKING AT WHAT I REALLY LISTEN TO. AND IT’S THE GUITAR-BASED, VOCAL-DRIVEN ROCK’N’ROLL I LOVED 10-20 YEARS AGO,”
adds vocalist Ville Malja, known until now as a driving force in Lapko. 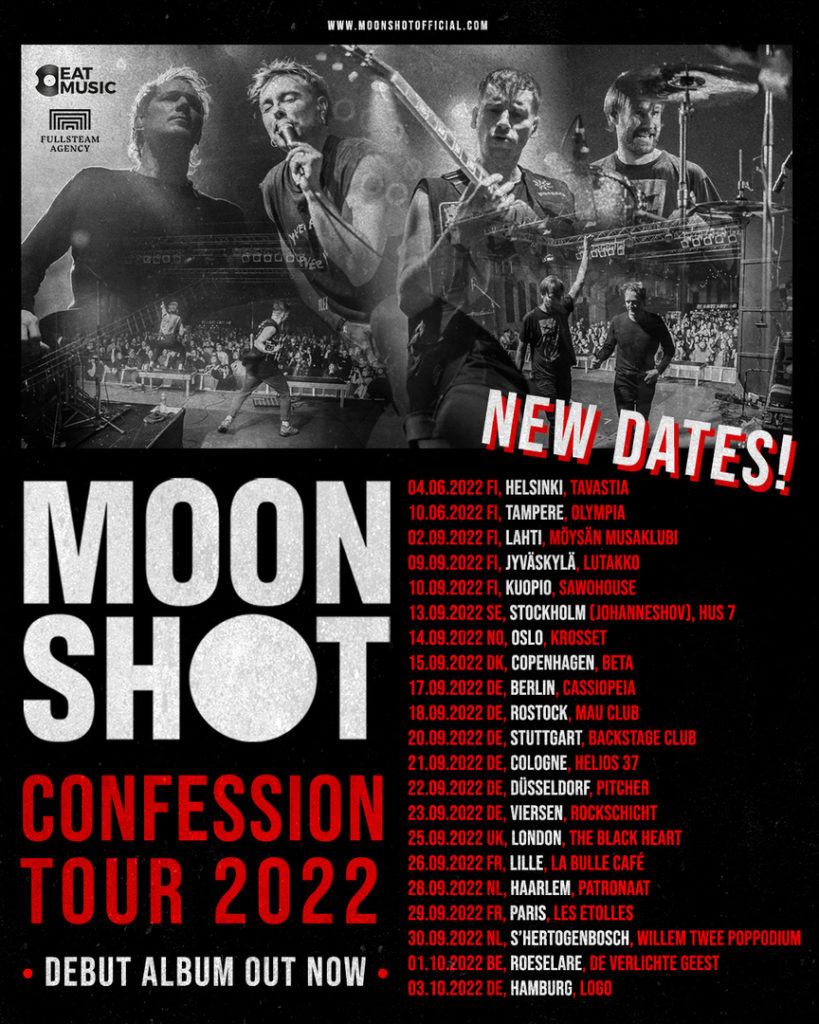